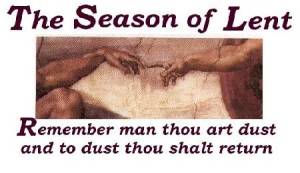 The Teutonic word Lent, which we employ to denote the forty days’ fast preceding Easter, originally meant no more than the spring season. Still it has been used from the Anglo-Saxon period to translate the more significant Latin term quadragesima(French carême, Italian quaresima, Spanish cuaresma), meaning the “forty days”, or more literally the “fortieth day”. This in turn imitated the Greek name for Lent, tessarakoste (fortieth), a word formed on the analogy of Pentecost (pentekoste), which last was in use for the Jewish festival before New Testament times. This etymology, as we shall see, is of some little importance in explaining the early developments of the Easter fast. (Catholic Encyclopedia)

Prayer – An act of the virtue of religion which consists in asking proper gifts or graces from God. In a more general sense it is the application of the mind to Divine things, not merely to acquire a knowledge of them but to make use of such knowledge as a means of union with God. This may be done by acts of praise and thanksgiving, but petition is the principal act of prayer.

Almsgiving – Any material favour done to assist the needy, and prompted by charity, is almsgiving. It is evident, then, that almsgiving implies much more than the transmission of some temporal commodity to the indigent. According to the creed of political economy, every material deed wrought by man to benefit his needy brother is almsgiving. According to the creed of Christianity, almsgiving implies a material service rendered to the poor for Christ’s sake. Materially, there is scarcely any difference between these two views; formally, they are essentially different. This is why the inspired writer says: “Blessed is he that considers the needy and the poor” (Psalm 40:2) — not he that gives to the needy and the poor. 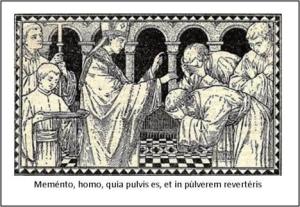 The name dies cinerum (day of ashes) which it bears in the Roman Missal is found in the earliest existing copies of the Gregorian Sacramentary and probably dates from at least the eighth century. On this day all the faithful according to ancient custom are exhorted to approach the altar before the beginning of Mass, and there the priest, dipping his thumb into ashes previously blessed, marks the forehead — or in case of clerics upon the place of the tonsure — of each the sign of the cross, saying the words: “Remember man that thou art dust and unto dust thou shalt return.” The ashes used in this ceremony are made by burning the remains of the palms blessed on the Palm Sunday of the previous year. In the blessing of the ashes four prayers are used, all of them ancient. The ashes are sprinkled with holy water and fumigated with incense. The celebrant himself, be he bishop or cardinal, receives, either standing or seated, the ashes from some other priest, usually the highest in dignity of those present. In earlier ages a penitential procession often followed the rite of the distribution of the ashes, but this is not now prescribed.

There can be no doubt that the custom of distributing the ashes to all the faithful arose from a devotional imitation of the practice observed in the case of public penitents. But this devotional usage, the reception of a sacramental which is full of the symbolism of penance (cf. the cor contritum quasi cinis of the “Dies Irae”) is of earlier date than was formerly supposed. It is mentioned as of general observance for both clerics and faithful in the Synod of Beneventum, 1091 (Mansi, XX, 739), but nearly a hundred years earlier than this the Anglo-Saxon homilist Ælfric assumes that it applies to all classes of men. “We read”, he says,

in the books both in the Old Law and in the New that the men who repented of their sins bestrewed themselves with ashes and clothed their bodies with sackcloth. Now let us do this little at the beginning of our Lent that we strew ashes upon our heads to signify that we ought to repent of our sins during the Lenten fast.

And then he enforces this recommendation by the terrible example of a man who refused to go to church for the ashes on Ash Wednesday and who a few days after was accidentally killed in a boar hunt (Ælfric, Lives of Saints, ed. Skeat, I, 262-266). It is possible that the notion of penance which was suggested by the rite of Ash Wednesday was reinforced by the figurative exclusion from the sacred mysteries symbolized by the hanging of the Lenten veil before the sanctuary.

The season of Lent starts on Ash Wednesday and ends on the Holy Thursday before the Evening Mass of the Lord’s Supper. From then on until Easter Sunday the Church celebrates the Easter Triduum of Christ’s passion and death, burial, and resurrection.

Lent is characterized by penance for our past sins, works of mercy especially toward the poor, and personal preparation for the renewal of our baptismal promises on Easter Vigil. Thus Lent has two features: penitential and baptismal. Our tears of penance renew in our hearts and souls the water of baptism.

The ashes imposed on us on Ash Wednesday remind us that we are dust and to dust we shall return and that therefore the entire life of a Christian should be marked by works of self-denial and generosity. The traditional discipline of Lent consists of constant prayer and reading of God’s word, fasting on Ash Wednesday and Good Friday, abstinence from meat on Fridays, and works of mercy especially to those who have less in life. What is important is that through prayer and good works we allow God’s grace to bring about our interior conversion. The sacrament of penance should accompany our Lenten observance.

Holy Week is the high point of the Lenten season. It opens with procession with blessed palms and the gospel reading of the passion and death of Our Savior. The triumphal entry into Jerusalem ended on Calvary, but we know that Good Friday led to Easter Sunday.

The biblical readings and prefaces extol the virtue of conversion of life, the need to fulfill our baptismal promises, joyful acceptance of daily trials for the love of God, and unselfish service to all who need our assistance.

The color used for most of Lent is purple, red violet, or dark violet. These colors symbolize both the pain and suffering leading up to the crucifixion of Jesus as well as the suffering of humanity and the world under sin.  But purple is also the color of royalty, and so anticipates through the suffering and death of Jesus the coming resurrection and hope of newness that will be celebrated in the Resurrection on Easter Sunday.